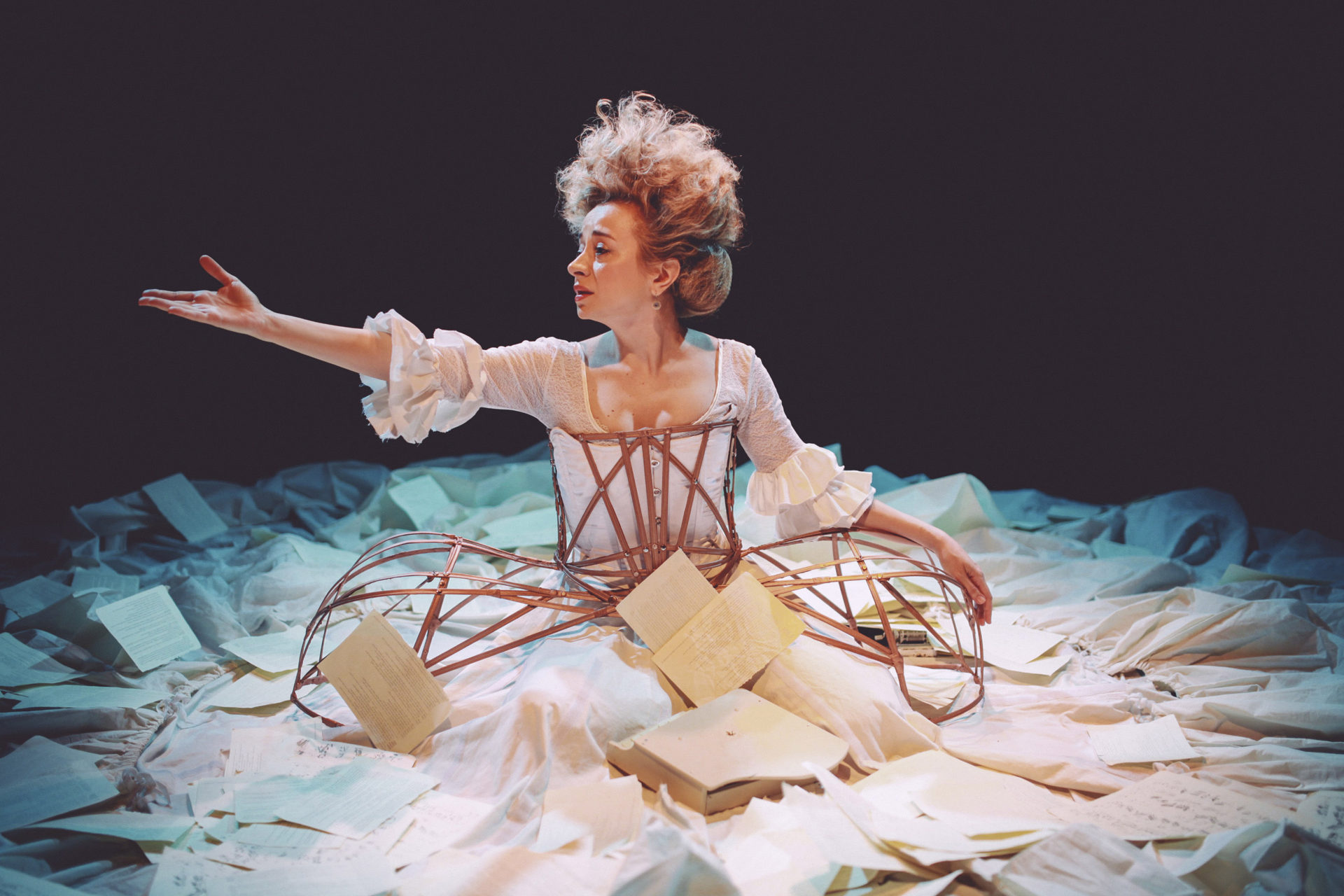 An award-winning actress and playwright, based in NYC. Her self-produced play, The Other Mozart, (about the forgotten, genius sister of Amadeus) had a critically acclaimed Off-Broadway run at HERE Arts Center (DRAMA DESK and OFF BROADWAY ALLIANCE nominations. 2 New York Innovative Theatre Awards and 8 nominations), in London at St. James Theatre, in Munich at the Pasinger Fabrik, and in Hong Kong at the Hong Kong Cultural Center. It was presented in Vienna at the Mozarthaus Vienna (the “Figarohaus”, Wolfgang’s home on Domgasse) and in Salzburg at the invitation of the Mozarteum Foundation (inside the Mozarts’ Wohnhaus apartment). The play has had over 300 performances and continues touring in the US, Canada, Europe and Asia. She received the New York Innovative Theatre Award for Outstanding Solo Performance in The Other Mozart, and Off Broadway Alliance Award nomination for Best Solo Performance. Sylvia played Bob Dylan in the OBIE Award-winning The West Village Fragments — by Peculiar Works; Ophelia in The Ophelia Landscape — at the Mark Morris Center; Hamlet in Hamlet — an all-female version of the play, which she adapted and directed herself; she has performed at La Mama, Cherry Lane, Ontological-Hysteric, Dixon Place and The Ohio Theatre. As a member of the Bats at the Flea Theater she co-wrote and starred in Seating Arrangements — directed by Eric Pold of Gob Squad. Sylvia is also a violinist (acoustic and electric violins – Irving Plaza, Knitting Factory, CBGB’s, Joe’s Pub) and has composed scores for dance and theater (Merce Cunningham Studio, La Mama). She is a graduate of New York University, with extensive training at the Lee Strasberg and Stella Adler Institutes, in Michael Chekhov technique, and at The Grotowski Institute in Poland. Her new play on Mary Magdalene has been workshopped in NYC at Theaterlab with support from All For One, and at the Baryshnikov Arts Center as part of Sylvia’s and composer Nathan Davis’ Baryshnikov Bogliasco Fellowship.

DANIELA GALLI is an accomplished actress with a diverse background in the arts. She began her journey as a dancer and musician in her native Brazil, where she was a member of modern and tap dance companies and played the oboe with the Symphonic Orchestra of Campinas. She later studied Architecture and Urban Planning, and worked as a set designer off-Broadway and as an associate designer for Tony Walton on Broadway and at venues such as Lincoln Center for the Performing Arts, Kennedy Center, and The Royal Court Theatre. She then turned her focus to acting, studying at HB Studios and making her mark in Brazil’s theatre, film, and television industries.

Some of Daniela’s recent credits include the Amazon series El Presidente (Season 2), Passport to Freedom (Sony Pictures), Renegate Arcangel (Globoplay – Season 2), and How To Be a Carioca (Disney Plus). She has also been recognized for her work in films such as My Hindu Friend, directed by Hector Babenco and starring Willem Dafoe, Netflix’s The Killer (for which she received a best actress nomination at the Gramado Film Festival), Those Hands That Lead Me by João Cortes, and The American Side by Jenna Ricker, starring Matthew Broderick. Her television credits include roles in popular shows such as Malhação (Globo Network), Obscure Power (nominated for a Contigo Award for best actress in a TV series), Mandrake (HBO), and other series for TV Globo and Record. Daniela has also showcased her talent on the stage, with notable performances in productions such as The Other Mozart by Sylvia Milo (off-Broadway and U.S. Tour), Ciranda by Celia Forte and directed by José Possi Neto, Realism by Anthony Neilson and directed by Tato Consorti, and PLAY by Rodrigo Nogueira and directed by Ivan Sugahara. She speaks Portuguese, English, Italian, Dutch and Spanish.

Isaac has been awarded the New York Innovative Theatre Award for Outstanding Direction twice and productions he has directed have been nominated for a Drama Desk Award, an Off Broadway Alliance award, 25 NYIT awards, and 11 Planet Connection Awards. He spent 13 years in New York City directing in Off Broadway venues including: HERE Arts Center, Joe’s [email protected] Public Theater, DR2, 59E59, and the Cherry Lane Theater. He has taught acting at the University of the Arts, the New York Film Academy, Texas State University, and the Tony nominated Matthew Corozine Studio in NYC. He studied acting with a variety of wonderful teachers including master acting teacher Fred Kareman, Larry Silverberg, Terry Martin, and Matthew Corozine. He also performs regularly with the Ad Hoc Economy theatre company in the award winning show Butcher Holler Here We Come. Productions he has directed have toured all over the world including in the UK (London, Edinburgh), Hong Kong, Germany, Austria, Estonia, Canada, and Italy. Directing Credits include: The Other Mozart, In Vestments, St. Kilda, AMP, Tar Baby, I Used to Write on Walls, and Rusalka. Regional Credits include: True West, We Are Proud to Present…, and Mr. Burns. MFA in Directing from Texas State University.

Nathan Davis “writes music that deals deftly and poetically with timbre and sonority,” according to the NYTimes. His ballet/opera Hagoromo premiered at BAM Next Wave Festival in a production from American Opera Projects, performed by the International Contemporary Ensemble (ICE) with dancers Wendy Whelan and Jock Soto. His work also includes premieres at Lincoln Center, Carnegie Hall, Symphony Space, PS122, the Park Avenue Armory, The Kitchen, and Roulette; as well as at festivals in Germany, Austria, Australia, Finland, Holland, Poland, and Cuba; and Portrait concerts at both the Mostly Mozart Festival and Spoleto Festival USA. Nathan has received commissions from ICE, Calder Quartet, Yarn/Wire, La Jolla Symphony Chorus, Steven Schick, Claire Chase, Donaueschinger Musiktage, Miller Theatre, and the Ojai Festival. He has received awards from Meet the Composer, Fromm Foundation at Harvard, Copland Fund, Jerome Foundation, American Music Center, MATA, ASCAP, and a residency fellowship at the Camargo Foundation in Cassis (France). He and Phyllis Chen won an NY Innovative Theater Award for their score to Sylvia Milo’s play The Other Mozart, for which Davis also received a Drama Desk nomination for Outstanding Sound Design. CDs include “On the Nature of Thingness” (winner of 2016 Independent Music Award for Best Contemporary Classical Album), “The Other Mozart”, and “The Bright and Hollow Sky”. As a percussionist, Nathan is a member of ICE, and has appeared as a concerto soloist with the Seattle Symphony, Tokyo Symphony, and the Nagoya Philharmonic. He holds degrees from Yale and Rice.

Described by the NYTimes as “spellbinding”, Phyllis is a composer, keyboardist and toy pianist. 2019 Cage-Cunningham Fellow at the Baryshnikov Arts Center. She has created several original miniature theatre works (The Memoirist, The Slumber Thief and Down The Rabbit-Hole) in collaboration with video artist, Rob Dietz. Phyllis has received commissions by the International Contemporary Ensemble, A Far Cry, Claire Chase Density Project, Opera Cabal, Opera SHOP, Singapore International Festival of the Arts, Roulette-Jerome and others. She has received grants from New Music USA, Foundation for the Contemporary Arts, NYSCA (via Concert Artists Guild and Look & Listen Festival), Fromm Foundation and the Pew Heritage Trust. Her most recent collaboration with fellow The Other Mozart composer, Nathan Davis, is a large-scale site-specific work for the new Fisk 150 organ at the Christ Church of Philadelphia. The work, In Plain Air, performed by the International Contemporary Ensemble, featured an outdoor music box installation, including a 400-foot long music box strip. Phyllis was the solo on-stage musician for the Off-Broadway production of Coraline at the Lucille Lortel Theater. She is one of the founding members of the International Contemporary Ensemble and the founder of the UnCaged Toy Piano, a composition competition to further expand the repertoire for unusual instruments. Graduate of Oberlin Conservatory (BM), Northwestern University (MM) and Indiana University (DMA). Her piece Chimers, based on Papageno’s magic bells from Mozart’s Magic Flute, was premiered at the Lincoln Center’s Mostly Mozart Festival. Her latest album, “On The Nature of Thingness” (Starkland), featuring the chamber works of Phyllis and Nathan Davis, was awarded the 2016 Independent Music Award for Best Contemporary Classical Music Album.

A versatile Polish designer whose projects include fashion, theatrical costumes and set designs, Magdalena is a graduate of Łazarski University in Warsaw and of the Cracow School of Art and Fashion Design. Her designs have been finalists at such prestigious competitions as Oskary Mody, OFF Fashion, and Złota Nitka. She participated in joint shows organized during the International Millinery Competition in France. She designed costumes for the plays, Taksówka, Spacerowicz and Ukryj Mnie w Gałęziach Drzew directed by Igor Gorzkowski for Studio Teatralne KOŁO. She also designed sets and costumes for Obchód Teatru, Czyli Kim Jest Wojciech B.? at the National Theatre of Poland and for the opera, Hamlet, at the Teatr Wielki in Poznan, Poland.  She also runs INNI – a fashion and costume design studio.

A graduate of the stage design program at Southern Methodist University in Dallas, Texas, Joshua resides in New York City and designs lighting for a variety of projects all over the world; from intimate solo shows to full operas, from architectural installations to modern dance.  Some designs of note include The Edge of Some World, choreographed by Jonathan Fredrickson and premiered in Beijing; The Blue Frog jazz club in Mumbai; A Celebration of Music and Dance with The Limon Dance Company and Simon Bolivar National Youth Choir of Venezuala at Lincoln Center.  Recent Designs include Tar Baby by Desiree Burch, La Boheme for The Bronx Opera and and Madame Butterfly for the Martina Arroyo Foundation.

An emerging hairstylist residing in Brooklyn. Originally from Milwaukee, Wisconsin, she graduated from the Aveda Institute, completed an assistant program at Mizu Salon in NYC, and decided to expand her skillset into barbering at Freeman’s Barbershop. Courtney has styled for countless fashion events, film and theater, print and online publications, and is now working for DIOR as the lead wig stylist. (In The Other Mozart Courtney sculpts the actress’ hair – it is all and only the actress’ real hair!)

An artist known for combining her talents as an actress, singer, and a director, Anna Sroka is a graduate of the Theater Academy in Warsaw, Poland. She has received awards from the Minister of Culture and Art, Przegląd Piosenki Aktorskiej, Wybrzeże, ZASP (for her role in the play “Taksówka” by Igor Gorzkowski), Złota Maska” (for her role in “Rent”, directed by Ingmar Villqist).  She is part of the Olga Lipinska Cabaret, has performed the titular role in the play “PIAF” directed by Jan Szurmieja, and she tours with the show “Ale… i Nie Tylko (songs of Edith Piaf).”  “Ulica, Która Płyną Moje Obie Dłonie” is her authored play, written to the songs of Zygmunt Konieczny and Andrzej Zarycki.  Anna Sroka teaches song interpretation at ZPSM and in Wyższa Szkola Komunikowania i Mediów Społecznych in Warsaw in the acting department.  She directed “CooLos” at ZPSM in Warsaw and works regularly with Teatr Polonia, Teatr Studio, Teatr Ochota, Studio Teatralne Koło, Teatr Nova Scena Teatru Roma, Teatr Montownia, and Teatr Rozrywki.  Soon she is releasing her CD “Dziwny Owoc” of songs by Billie Holiday, with Włodzimierz Nahorny.